When In Drought…Feed the Soil 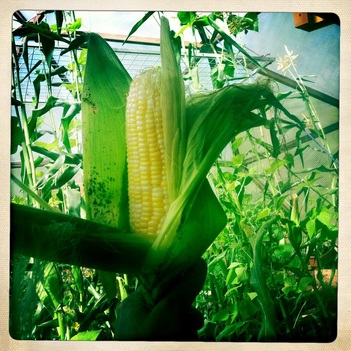 Our first corn!
As I inspected our small crop of corn in the growing dome today, I found one lone ear infested with aphids. The crop is almost ready to harvest so I thought I would take a peak and make sure the little buggers hadn’t damaged the corn. As I slowly peeled back the husk to reveal the ear, I felt a little like Charlie in the Chocolate Factory unwrapping to find the golden ticket. Would my hard work be rewarded with a healthy ear of corn??

Lucky for me, it was stellar! I’m a little biased but it was the most beautiful ear of corn I’ve ever seen. I felt a little guilty as I revered this work of art thinking of my comrades in the Midwest suffering from the drought and entire corn crop failures.

Conventional farmers with “big ag” contracts are protected with crop insurance. The same can’t be said for small specialty-crop farms especially organic farms. They aren’t eligible for these benefits leaving them to take the hit. For CSA farmers, they can at least lean on their members for a type of “crop insurance.” In these desperate times, CSA members are learning firsthand what it means to share the risk with the men and women who grow their food.

As I’ve been following the drought, I couldn’t help but wonder, “how are the organic farms holding up?” Are they doing better? And are conventional growers starting to see the pitfalls of their farming methods which deplete the soil making them more vulnerable to drought? I haven’t been able to find a report documenting this just yet but I did find an article by one of my favorite food & farming writers, Tom Philpott. I was glad to see he was asking the same questions. And while the results aren’t in for 2012, studies have been done which prove that organic crops have higher yields than conventional crops during times of drought and heavy rain. Why?

Organics fields are high in organic matter. The organic matter is a result of regular composting, diverse crop rotations and cover crops. It feeds the soil and in the process stores atmospheric carbon. Carbon rich soil is able to retain moisture helping soil to be more resilient during drought years. During heavy rains, carbon high soil can manage water better so it can filter through the soil versus not being able to penetrate hard, nutrient deficient soil which leads to flooded fields.

It isn’t surprising then to learn that organically managed soil is a great way to sequester carbon and mitigate climate change. When carbon is in the soil it is not in the atmosphere. Conventional crops can’t say the same. The soil food web which creates the environment to sequester this carbon is destroyed when treated with synthetic chemicals.

My hope is that the 2012 drought will be taken into consideration during the final stages of the 2012 Farm Bill creating incentives to help conventional farms transition to organic and in the process transfer some of the crop insurance over to the farms making the switch in order to protect  their efforts.