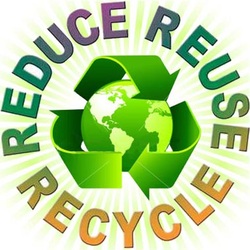 The holidays are always a good time to revisit the amount of waste we generate in this country because probably at no other time during the year is more waste produced than during the holidays. Its a good reminder too that no longer is recycle the operative word but REDUCE! If we consume less, there’s less energy and resources used to produce and less stuff to throw away.

NPR’s Science Friday with Ira Flatow had a great interview this past Friday, November 23rd about the amount of food wasted in the United States. Here is a link to the podcast. On the show was Dana Gunders, Project Scientist with the Natural Resources Defense Council and Jonathan Bloom, author of American Wasteland.

Over 40% of the food produced in the US gets thrown away and only 3% of it gets recycled or composted .When you consider that 50% of the land in the US is in agricultural production, we are squandering a lot land not to mention a lot of food. In the process, we are exploiting the natural resources used to produce that food such as fossil fuels for farm equipment, water for irrigation and soil fertility. And with water becoming a finite resource, its scary to think that 80% of the water used in this country goes to growing food.

To bring that into perspective, Project Scientist, Dana Gunders, made a great reference point, “Throwing away half a hamburger is equivalent to taking a one hour shower for the amount of water needed to produce that half a hamburger.” Jonathan followed that up with another staggering statistic, “The amount of food wasted each year in the United Sates could fill up Crater Lake twice…TWICE!!

Food gets wasted at every step along the supply chain starting on the farm then at the grocery store and in our homes. On the Farm, food goes unharvested in the fields either because there was a surplus with no buyer or the price per bushel is too low to make it financially feasible to harvest. In the grocery store, tons of food gets thrown away each day simply because it has past a “suggested” Best If Used By date. Documentaries like DIVE expose this wasteful scenario and the dumpster divers who feed their families “well” off this trash but also rescue it for food banks and pantries. And we know all too well the amount of food that we each waste in our own homes. We buy in bulk because it is a good deal and then it goes bad in our refrigerators. And we don’t plan meals properly. We buy a bunch of carrots when we only need one or buy a bunch of cilantro for one recipe but don’t find a recipe later in the week which will use up the rest of the cilantro.

We are all trying to save money. But before we say we can’t afford organic, think about all the money we are throwing away in the food we buy. Over $165 billion dollars gets thrown away each year in the United States. With food costs rising, consumers need to be more conscious, grocery stores need to be more thoughtful in how they transition expired food and our agricultural  industry needs to efficiently manage their land and water resources.

In this context, when we talk about feeding the world, we don’t have to look much further than the end of our forks!