The Walls Came Tumbling Down 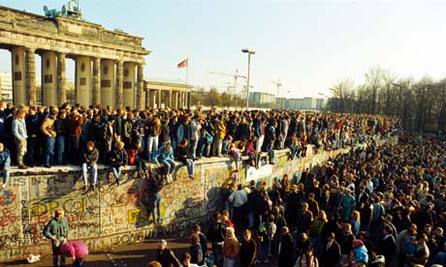 On this Labor Day, I’m going to share an inspirational story for all the hard work we are doing to better the way we grow and distribute food.

I’m reading the new book by Oran Hesterman, Fair Food. It‘s right up my alley…”growing a healthy, sustainable food system for ALL!” At the end of Chapter 1, Oran shared a metaphor for how this change will be realized. He compared the fall of the Berlin Wall to the change in our food system. Here’s the excerpt…

“In 1988, it would have been nearly impossible to find a political analyst predicting the fall of the Berlin Wall. Yet, one year later that is exactly what occurred. It surprised everyone. So how did this happen? I think of all the political activists in East Germany who spent years working to erode an ineffective political system. In metaphorical terms, they each had a small chisel and hammer and were chipping away at the wall day by day, each in their own way, often disconnected from each other. And then these same folks used actual hammers and chisels to start banging against the stones. A point occurred in 1989 when enough activists had been at work with their tools that the political infrastructure and the foundation of the wall were sufficiently weakened, and the wall came tumbling down.

In the same way, we have had food system activists chipping away at the current broken food system for many years. Countless farmers, gardeners, leaders, students, teachers, writers, politicians, businesspeople, academics, and moms and dads, with the equivalent of chisels and hammers in their hands, have been challenging the current food system brick by brick. Every time someone decides to get their food at a farmers’ market, establishes a small-scale organic farm, or develops a new sustainable supply chain for their company, they are attempting to change the current system, one step at a time. Just as we will never know who removed the actual brick that caused the Berlin Wall to collapse, we don’t know which specific innovation will serve as the tipping point for change in the food system, but it will happen, sooner or later.”

After reading, I was filled with so much hope. I could all of a sudden see the forest for the trees in the food movement demonstrating that no one action is alone. We are not individual trees. We are a forest all working together. But we need more trees in our forest so start planting seeds. With a critical mass and a little more unification, we will do this!