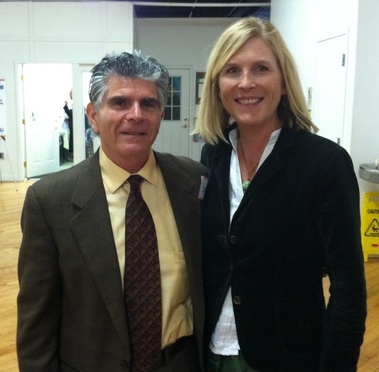 Oran Hesterman of the Fair Food Network and me
Over the past month, I’ve quoted and commented from the book, Fair Food, by Dr. Oran Hesterman PhD. On Monday, I had the unique opportunity to drive with Oran from Ann Arbor to Detroit to attend the Fighting Hunger Summit hosted by United Way of Southeastern Michigan at the Gleaners Food Bank.

Oran’s book offers insight, case studies and strategies for “growing a healthy, sustainable food system.” A sustainable food system is fair. It’s fair to the earth, the animals and the people. Our current system is not exactly fair. It is built on profit instead of equity. Both can lead to economic vitality but a profit-based system leaves a wake of inequities in its path. Those marginalized, however, can bring value to the system celebrating the cultural, biological and economic diversity of our planet and our society. Oran reminds us…Diversity on the farm and diversity in the marketplace builds resilient, equitable, local economies.

My 50-minutes of car time gave me the opportunity to soundboard ideas that have been collecting along my food journey. His book germinated all kinds of new ideas and our conversation gave me the straight talk I needed to steady my course. 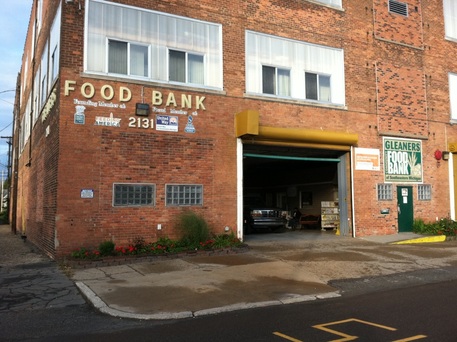 Gleaners Food Bank – Detroit, MI
Arriving at the summit, Oran headed on to keynote, speaker duties and I made my way around to all the organizations tabling during the breakfast reception. I quickly filled a bag of brochures and handouts. I was ready to learn from a city of people who have been fighting hunger since the conception of the food stamp. Detroit was one of 40 counties nationwide in the 1961 pilot program before the act was later established in 1964. By holding the summit at a food bank, the conference grounded people to the issue. No fancy, banquet hall to separate attendees from the job in front of us all…food justice.

Detroit is quickly shifting its spotlight away from depressed, former-boom town to the new face of urban living. At the heart, is Detroit’s vibrant community garden program. And at the helm, is The Greening of Detroit who supports over 1000 gardens as well other educational and advocacy programs to green Detroit like their tree planting initiative. Not only does Detroit know the pains of hunger but the victories of rising up. A battalion of other organizations sit side-by-side The Greening of Detroit in their effort to make Detroit a more prosperous and equitable city like Forgotten Harvest, Detroit Food Policy Council, Double-Up Food Bucks, etc. 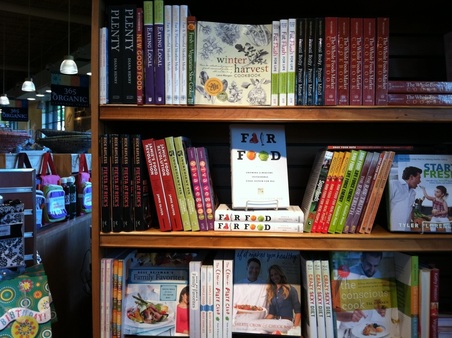 “Fair Food” proudly displayed on the shelf at the Ann Arbor Whole Foods store
The summit convened. The objectives were clear…the United Way of Southeastern Michigan wanted to better understand the barriers to food access. By calling together the area’s food leaders, they would be able to glean the necessary items to build a strategy for improvement. Breakout sessions on five, different barriers would pave the way. As each group presented their findings, a trend emerged…better collaboration between community non-profits working on food related issues. My recommendation…United Way should do an assessment of all the organizations in Southeast Michigan and evaluate where their is duplication, low-lying fruits and missed opportunities. Create a coordinator position which audits these actions and develops a communication system to leverage these efforts and build relationships. Through this process, United Way will shift from being an just agent of “social services to social change.” **

** Credit for this quote goes to my table-mate, Shane Bernardo, who works across the street from the Gleaners Food Bank at Earthworks Urban Farm as the Outreach Coordinator.