Putting Biology Back in Soil! 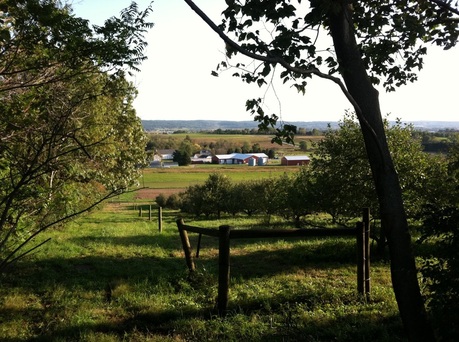 View of the Rodale Institute and farm from the orchard
Last Thursday afternoon, I headed to Kutztown, PA and a 3-day soil class at “the” Rodale Institute. For years, I’ve revered Rodale for their contributions to the advancement of ecological growing techniques. My trip felt more like a pilgrimage to a world heritage site. While the farm’s idyllic landscape could be mistaken for a landmark or park, the 300-acre demonstration like-garden is hard at work setting the standard on what is possible in biological farming. Rodale has been doing side-by-side trials in organic agricultural for three decades comparing yields, energy consumption, soil fertility and profitability between organic and conventional farming practices. Their results speak for themselves proving organic’s ability to out compete conventional in every category. Don’t believe me, read their 30th anniversary report on their Farming Systems Trial. They are the oldest research station of its kind in North America and the same age as the one started in Switzerland the same year, 1981. They know a thing or two!

During the seven hour drive to Kutztown, I had lots of time to imagine what my my impending experience would be like. And I had lots of co-pilots to help me soar with ideas…I wasn’t in the car more than 10-minutes when NPR aired Steve Job’s entire 2005 Stanford commencement speech. If that speech doesn’t get you inspired and fired up, I don’t know what will. Wow! He was as powerful a speaker as he was a pioneer. Loved his story about quitting college to audit the classes that most interested him. It renewed my faith in the ad-hoc curriculum I’ve created for myself in learning about our food system. Later, when I grew tired of music and the NPR stations were fading in and out of reception, I started streaming podcasts from the Dirtbag Diaries. They are a collection of stories by outdoor enthusiasts whose life is defined not by what happens during work but what happens before and after. One particular episode was by filmmaker, Allie Bombach. Her film, 23 Feet, is about the community which binds the tribe of people who not only follow the road but live on the road in route to their next adventure. Having rented my house for a year in order to take this eco-quest, I could relate to this liberating, nomadic lifestyle. Guess you could say, I’m “staying hungry and staying foolish!” 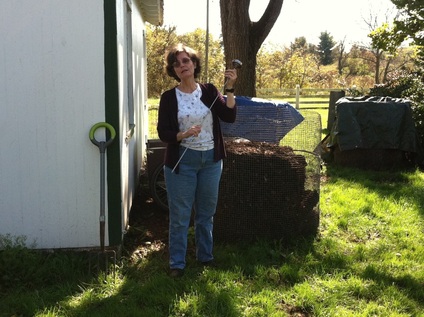 Dr. Elaine Ingham, PhD demonstrating the use of a compost temperature probe.
Landing in my hotel bed at 10pm, anticipation filled me like the night before Christmas.The next morning, I drove down a country road and through the gates of Rodale’s 280-year old estate. I was here! It really exists. But unlike a fairy tale, it was most certainly real. And in Rodale style, we were to be trained by the best, the Jane Goodall of Soil, Dr. Elaine Ingham, PhD – founder of the Soil Foodweb and Rodale’s NEW Chief Scientist.

The course content delivered. It was packed full of all the science, ratios and explanations I needed to answer the questions which perplexed me most. I’m now in even more awe at the dynamics of soil. Soil is as simple as it is complex. Complex for the million of interactions occurring below ground but simple in its message…biology! Conventional agriculture primarily uses chemistry to fix imbalances and organic agriculture uses biology (life) to keep the chemistry in balance. Biology teaches how to introduce and encourage nutrients naturally in the soil versus relying just on a pH test to prescribe nutrients and then apply them.

Let me explain…If plants only needed roots to stand up, we could just inject their stems with chemical nutrients. But plants need their roots to get nutrients. And roots have a certain way of absorbing these nutrients from the soil. Conventional agriculture, however, overrides the biological processes that roots use to absorb these nutrients. How? Synthetic fertilizers are delivered in a ready-made form that the roots can absorb without the soil microbes having to do anything. Sounds like we are doing the plants and roots a favor. Quite the contrary…surrounding each root is a universe of fungi and bacteria working in unison to get soil nutrients ready for the plant to absorb. These fungi and bacteria as well as worms, insects and other microbes perform a nutrient cycling dance eating and being eaten by each other to create these nutrients (nitrogen, calcium, phosphorous, etc.). Toss down a bunch of ready-made chemical nutrients for the roots to absorb and we disrupt the biological process of the root community. The fungi are like the soil’s respirator breathing life into the soil so the plant can get its nutrients. Take their job away and they stop working. Your left with bacteria who have nothing better to do than to multiple literally sucking the life out of the soil. Respecting the biology between the plant and the roots, the roots and the soil and the fungi and the bacteria keeps things in balance. To build soil structure and build healthy plants, we need to let biology do its thing!

That’s the quick skinny, check back for more on how to get this balance in your soil…