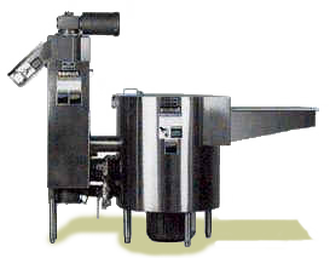 Sexy, isn’t she? This is the Somat Pulper 3000. Okay, it’s just called the Somat Pulper but 3000 better describes its powers. It looks like a widget maker but this little beauty gives a whole new meaning to “it slices, it dices.” Feed it a mixture of food scraps and paper products and it will excrete a pulpy slurry that can be used in farming and garden compost. It’s being used by institutions like schools, corporate dining rooms, hospitals, etc. that want to reclaim their food waste. Not only does it save them money at the dump but it is good for the earth too.

No, I didn’t see it on a rerun of Home Improvement with Tim “The Tool Man” Taylor – although it is right up his alley – but I did see it an unveiling yesterday at Oberlin College’s dining hall. It was the inaugural demonstration. Oohs and aahhs went up from those in attendance as the waste went in and even smaller waste spat out. The water used to process the waste is recycled versus being flushed down the drain like a conventional, garbage disposal. The Pulper can handle not only fruits and vegetables but also meat, dairy, napkins, cardboard, paper plates and even the bones. Typically, meat and dairy can’t go in regular composting projects because there is not enough heat generated to break them down. But with the pulper, everything gets pulverized allowing the meat and dairy to decompose easier requiring less heat. The process is speed up even faster when composting with earthworms known as vermiculture. The relationship between Oberlin College and George Jones Memorial Farm where I work is the ultimate closed loop…food comes in from George Jones to the college cafe and then goes back as vermiculture compost. Pretty nifty!

I haven’t visited a college dining hall since i graduated in 1992. Boy, have things come a long way. Felt more like a restaurant than a cafeteria. I realize that Oberlin is not indicative of most colleges but it is a good model to follow. In advance of the pulper’s arrival, Oberlin initiated two policies to make students more aware of how much food is wasted when they take more than will be eaten…first, food scraps were collected and weighed in effort to challenge students to reduce their food waste and second, trays were removed so students could take only what they could carry. Programs like this were the collaborative brain child of both Oberlin staff and their ecologically conscious dining service, Bon Appetit Management. 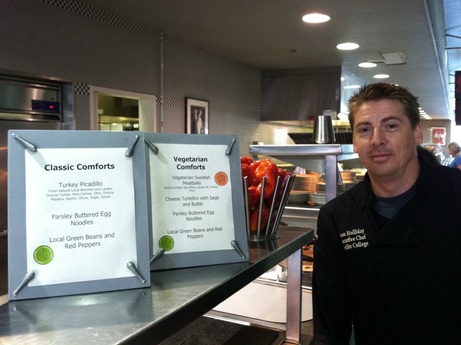 The dining hall is called a “cafe” versus a “cafeteria” to suggest an eating experience instead of just a feeding. Bon Appetit creates a space where food can be appreciated…recessed and natural light, appetizing displays and stories about the food and where it comes from – as pictured here with Executive Chef, Dean Holliday. Dean told me how the college sources 23% of their food locally. “Local” is defined by Oberlin as food purchased within 150 miles or from companies smaller than $5 million. In addition to George Jones and other area farms there is a campus garden and a kitchen garden for easy, on-site picking. To get local food in the off-season, they enlist the technology of companies like CIFT which can flash freeze vegetables such as beans, peas, strawberries and more during the summer/fall harvest which can later be enjoyed in winter months. It’s frontier days meets the 21st century!