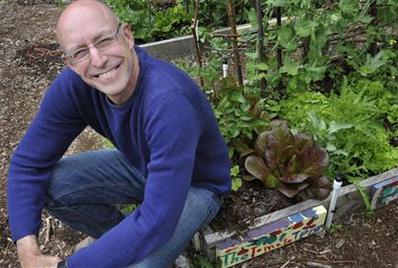 Food Day was Monday October 24th. Schools, farms, communities and kitchens everywhere celebrated in a feastly fashion to recognize the need for more thoughtful consideration of the nation’s food system. One of the founding fathers of the special day, Michael Pollan, was found in Cleveland. He was the special guest of Cuyahoga County Public Library’s writers series at Playhouse Square. Interviewer and fellow journalist, Dan Moulthrop, guided the audience on an exploration of Michael’s food journey and his current perspective on the food movement.

Opening the conversation, Michael and Dan polled the crowd for how many knew it was Food Day. A paltry number raised their hands but it didn’t deny the fact that it was a sold-out crowd of 1000 people. Versus a lecture, the interview format served him well. It reminded the audience that while well-respected for his literary gift to the food movement, Michael does not claim to be a foremost authority on the subject. He isn’t a preacher. He is a collector of information and a sharer of knowledge. He started by writing about what he loves, gardening. As depicted in his 1991 book, Second Nature: A Gardner’s Education. The unexpected fame of his later books, Omnivore’s Dilemma and In Defense of Food, made him an accidental agtivist. Now a poster child for the food movement, he remains humble in his accomplishments making it easy for people to respect him for his fair, journalistic style. He may be a zealot but he is not an elitist. He’s goal has always been to make people marvel at food’s wonder and see it in a different light. Michael shared how his literary hero, George Plimpton, made people marvel at football in the book, Paper Lion. 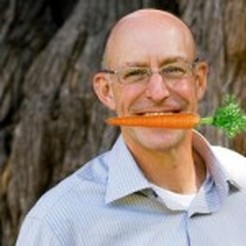 He’s happiest when his writing can give people the tools necessary to make their own decision gleaning from his work what they feel is important and will make a difference. He described the reaction he received after Omnivore’s Dilemma’s release. Some people approached him saying, “Your book made me become a vegetarian.” Others would say, “The book convinced me to start eating meat again.” While Michael advocates the ecological importance of livestock to the natural cycles of a diversified farm, he recognizes that our nation’s meat consumption is not sustainable. He reflects on a time when meat was a special occasion food not something served three times a day, seven days a week. “It’s okay to eat meat, just not as much,” he remarks. The less meat we eat, the better the meat can be raised. He reminded the crowd of what cows do for us, “Even though grass is good for humans, we can’t eat it. We aren’t ruminates. Cows are! They extract the grasses’ nutrition and pass it on to us.”

It didn’t take long for the 2012 Farm Bill to get mentioned. Michael didn’t get sidelined on a discussion about the particulars of recent downturns in the bill’s construction. He shifted the attention instead to President Obama’s failure to take a stand. He complimented the President, however, on his keen ability to connect the dots in any issue. The food issue was no different. Obama is fully aware of our food crisis. Then why is he not doing more? Why is he letting his wife go it alone? Michael Pollan’s essay in The Nation’s recent food issue summed up his response exactly, “President Obama has determined there is not yet enough political support to take on the hard work of food system reform, and the best thing to do in the meantime is for the first lady to build a broad constituency for change by speaking out about the importance of food.” 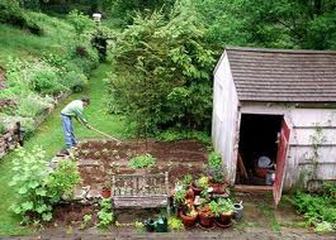 Michael’s home garden
Needing a stronger movement to pressure Washington, Michael and others created Food Day. Food needed an event like Earth Day. Responding to a question from the audience, “The movement lacks leadership and a national organization.” He encouraged supporters to not focus on eradicating conventional agriculture but to minimize it. “Realistically, there will always be two food economies…one that’s organic and one that is not.” It wasn’t exactly the “I have a dream” speech but his pragmatism set targets on achievable goals.

Perhaps it won’t be a movement at all that drives government to change the way we grow and distribute food. Michael may have made the flame flicker with his “two economies” comment but he made the fire roar when he pointed the finger at an unlikely ally to lead the charge, the health care industry. Michael Pollan’s essay in The Nation again summed it up perfectly, “As soon as the health care industry begins to focus on the fact that the government is subsidizing precisely the sort of meal for which the industry (and the government) will have to pick up the long-term tab, eloquent advocates of food system reform will suddenly appear in the unlikeliest places—like the agriculture committees of Congress.” During his interview, he pointed to the writing on the wall, “One in three children are predicted to conduct diabetes in their lifetime, a chronic disease.” The choice is ours he continued, “What would you rather have? Expensive food or expensive health care?”

On Sale Nov. 1, $23.95
Wrapping up, Michael discussed the blatant injustices which should not have to wait for a movement or health care. “90% of Americans polled want food labeled if it contains genetically modified ingredients (GMO). It is clearly undemocratic to deny this right when the public so obviously wants this conveyed.” Government says we need more science to prove the negative health impacts but seed giants like Monsanto won’t allow their seeds to be tested.

The evening had lots of laughter. Michael joked comfortably throughout the interview. Quoting from his new ,illustrated version of Food Rules, he enlightened the crowd by saying, “If you’re not hungry enough for an apple, then you’re probably not hungry.” And when an audience member asked him the tired question, “What would your last meal be?” He graciously pondered with a smile and replied, “Roasted chicken!”