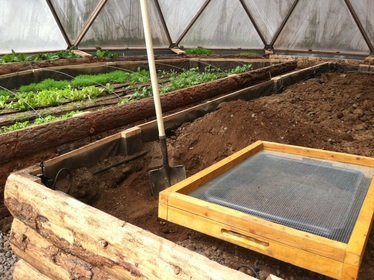 See photos below for making dirt into soil
The grow dome is really starting to take off. We are harvesting greens at least once a week: chard, spinach, lettuce, and mustard greens. Keep in mind, this is Tahoe in April. On average, the dome heats up b/w 75-95°F everyday. And at night, the dome is typically 25°F warmer inside than out. It got down to 12°F the other night and it was 37°F in the dome. The thermal mass of the water tank is really doing its job to retain the heat and the 4-walled, poly-carbonate exterior is keeping it trapped inside. They make a good team! This week we are making our first food donation to our local hunger relief agency, Project Mana. The original goal of the dome was to supplement food for Project Mana’s weekly food distribution. Considering it is only April, we are doing pretty good. Take a seedling tour by watching the video below.

This week’s project has been to get our last, big bed ready for planting. The other beds all had wonderful, compost-enriched, garden soil from our local compost authority, Full Circle Compost in Minden, NV. The garden bed by the water tank, however, only has about 10% of this yummy stuff. The rest of it is our native, clay-heavy, rock-ridden soil. With all that clay, it clots up into tight chunks as soon as water hits it. It needed help! It needed to have the big rocks removed and amended generously with organic compost to turn the clay dense soil into more of a loamy soil. Below is a photo progression of how I did it. It is so rewarding. I felt like I was mining for gold as I sifted the native soil through the screen and revealed this fluffy, aerated soil. Loosened and rock-free, the soil was now capable of being mixed with compost which would feed the soil food web and awakened its growing power.

1) Loosen the compaction of the soil with a digging tool. 2) Dig a square about 3’x3’x1′. Move in a grid pattern to get every area of the grow bed.

3) Place a soil screen, either bought or homemade, over a bin to raise it up off the soil. FYI…don’t use a screen with too tight of a gauge to keep all the rocks out. Small rocks add air pockets and leech healthy minerals. 4) Place a few scoops of the soil on to the screen.

5) Sift the soil through the screen by working it with your hands. 6) Your left with rocks on top and silky smooth soil underneath. Once the entire bed is sifted, it is ready to be amended with compost then seeded. 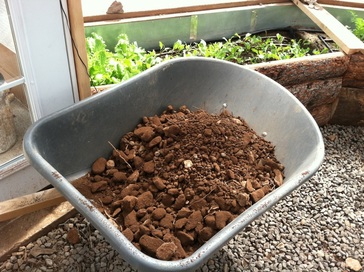 That’s all the rocks that came from just one square in the grid. That’s a lot of rocks!