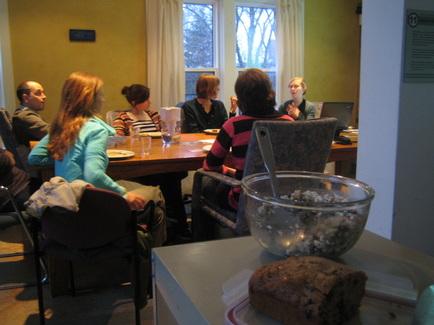 If your not already involved in the local, food movement, but want to be, it can feel a little like playing double-dutch jump rope…your on the sidelines wanting to play but something is holding you back. It’s hard sometimes to know when to stop watching and just jump into the mix. And if you are involved in the local, food movement then Food Policy Councils want you too…”What? How did we go from jump rope to food policy?” Well, if i just started spewing about food policy, I would have lost people at hello. Put the word “policy” in anything and watch people scatter. But it doesn’t need to be that way. The picture to the left looks like any kitchen table gathering but it’s actually a food policy meeting. Anyone one of us could picture ourselves at this table.

A food policy council often is initiated by local government but can also start at the grassroots level by concerned citizens. No matter who lite the match, the igniter then invites a cross-section of the community’s food system starting with representatives from the five main sectors: production, processing, distribution, consumption and waste recycling. That means people like farmers, chefs, grocers and consumers. The goal is simple…1) identify and propose innovative solutions to improve the local food system. 2) be a catalyst for economic development. And 3) make a local food system more environmentally sustainable and socially just.** Sensitive issues will be addressed and toes will get stepped on in these meetings but common ground can be reached because the end goal is for everyone’s betterment…a resilient food system that provides jobs and access to quality, healthy food for all!

I’m touting their praises because food policy councils are exactly the type of conversations we need to be having with our neighbors, area businesses and municipal leaders in order to give a voice to the problems in our food system and build bridges between policy makers and the public. Just as people are disconnected from where their food comes from, government can get disconnected from the food justice issues of its people. In the same turn, farmers can get too focused on just staying in business and disregard the long term impacts of their conventional, farming practices. 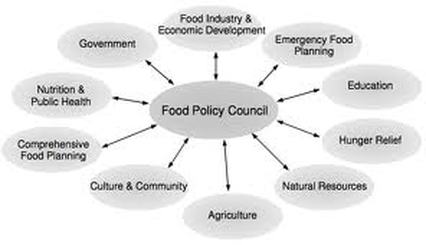 A couple weeks ago, I was talking to those involved in establishing a council in Northern Nevada and last week, I attended a meeting in Oberlin for establishing one here in Lorain County by a community learning center. I was energized by the enthusiasm as well as the hunger for such an initiative. It demonstrated that food policy councils are a great way for regular, concerned citizens to get involved in the local food movement and work with those who are involved and those driving legislation. Food policy councils are popping up all over the country and have been since the early 80’s. It might be as easy as asking around for one to join or starting a council where one does not exist. Either way, it’s like jump rope…you just have to jump in the game if you want to play. If you are interested in finding out more about establishing a food policy council, here are some resources from whom I gathered much of my own information for this blog: Food First** and Community Food Security Coalition**. And for a successful case study, check out Roots of Change. They are busy building roundtables like this all over the state of California.