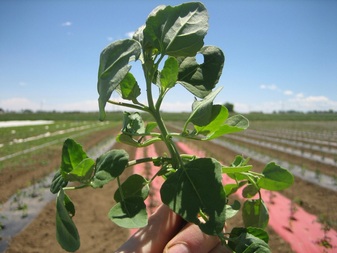 We are in a big hoeing cycle right now getting the beds ready so the starters can really take off. Using the Hula Hoe in soft soil like we have can be rather fun. It produces satisfying results and  the movement is very rhythmic, like a dance. But then there are times when the hoe won’t cut it and you have to get a little more up close and personal with the weeds. Yep, down on hands and knees. In this case, sorting baby green onions from the weeds which are trying to suffocate them. By the end of the day, I was ready for a new task but hey, this is farming. Farming is about tending to your crops, cultivating them and helping them thrive. There isn’t any job on a farm that is glamorous. It’s all about getting done what needs to get done and there are always weeds that NEED to be pulled. So instead of focusing on quittin’ time, I used it as an opportunity to learn about weeds. And as it turns out, weeds are pretty fascinating 🙂 Many are edible, medicinal or beneficial in some way. Take Lamb’s Quarter (as shown in the above picture). I recognized this weed immediately. I’ve seen it in Ohio where I grew up, in California, now Colorado. This guys gets around. But, it’s edible! It is the Chenopodium family along with other leafy greens like spinach and Swiss Chard. Other varieties include grains like quinoa! The infamous Pig Weed is the ugly step child of the Amaranth family whose more lovable cousins produce nutritious grains which can be used for a multitude of uses like flour, cereal and even popcorn. Obnoxious thistles and bind weeds which seem to serve no other purpose than to annoy you like mosquitoes actually have a higher purpose too…their “tap” roots extend deep to lower horizons in the soil which bring nutrients up closer to the plant. Plucking or chopping them back leaves those vitamins for the plant you are trying to grow versus allowing the weed to feed off it instead. Pretty cool system they’ve got. A natural herbicide/pesticides like Chrysanthemum can be used but it is pricey so many farmers don’t use it. And of course, we can’t use chemicals so the only other way to get the weeds is to pull them by hand. Yet another reason to love and cherish your food. Today I had to pull five weeds off one little green onion. I want that onion to make it’s way into a yummy salad and not get forgotten about in the crisper drawer of someone’s fridge.

The Greenhouse Project…below is a progression shot of the greenhouse in its next phase of transformation from a packed sand & granite floor to airable soil. After depositing loads of compost, we had Pete get a little practice with the plow by mixing the compost in with the tough ground below. Go Pete! 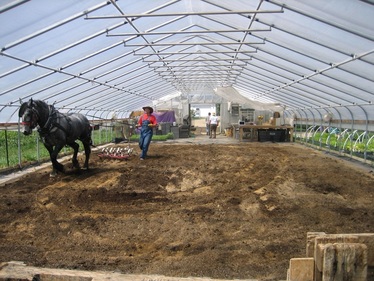