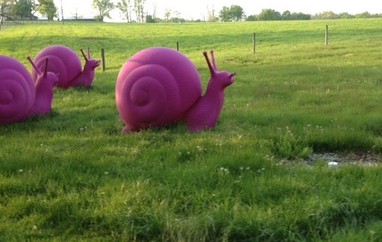 The Slow Food snail
I pulled out my wooden, travel utensils; opened my reusable container; and began eating my seasonal, organic broccoli and asparagus tossed in pasta and olive oil. Admittedly, I sat smugly enjoying  my pack lunch and the cacophony of crunching that filled my head. When I looked up, my green balloon quickly deflated. The man sitting across from me in the airport waiting area at Gate B16 wore a polo shirt with the Monsanto logo emblazoned in the upper left-hand corner…the enemy! I smirked at the irony. I looked down and admired my version of a happy meal and kept eating. My neighbor to my right was reading a newspaper. The headline read, “Fast Food on the Rise.” I looked to my left thinking I was maybe on candid camera. But instead, I saw a heavyset man hand his overweight mother a large, Ziploc bag full of prescriptions. She was slouched in a wheelchair. Her skin gray and sunken and dark bags hung heavily from her eyes. She fumbled with the bag. With shaky hands, she gave the bag back to her son and in exchange, he gave her a 6-Piece Chicken McNuggets.

She was dressed nicely in blue capris and a tailored, jean jacket. Her red Mary-Jane shoes matched her red cap and her white blouse stood in bright contrast. I lowered my fork and slowed my chewing. They didn’t notice my anthropologetic stare (I made that word up). But the social commentary was flashing in neon lights…Taking pills for the poison she is about to consume. Really?

It is hard to believe she doesn’t see the irony in her actions or make the connection between her health and nutrition. Is it apathy, education, denial, economic status? Comparing her outfit to her health, it is obvious that being treated for a disease seems to be more socially acceptable than not sporting a fashionable style. People will spend $100 for a pair of jeans but spend only $2.22 for a sandwich. Where are the priorities? A healthy meal will help you live a long life, a nice outfit will get you to the next season.

The real irony is…I was headed to the Slow Food National Congress in Louisville, Kentucky (pronounced Loul-ville). It was this past weekend. 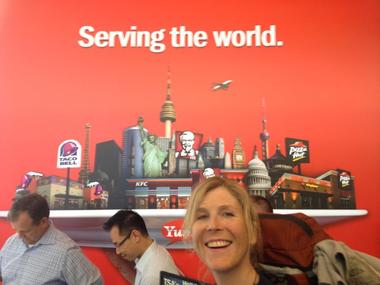 Going through airport security on the way home, this sign made us chuckle.
Slow Food is an international organization which advocates for “good, clean and fair food;” and the systems we need to fulfill that vision. Slow Food celebrates the pleasure of the table, community and the responsibility that comes with being an informed eater. Essentially, it is the opposite of fast food as depicted in the photo to the right. The movement got started in Italy in 1989 when the founder, Carlo Petrini, was appalled to see a McDonald’s at the top of the Spanish Steps in Rome.

There are Slow Food chapters in over 150 countries and roughly 2000 members in the United Sates alone. The National Congress is an opportunity for elected delegates from U.S. chapters, typically board members, to gather, share ideas, learn new organizing skills, vote on amendments and pull from our collective power to be successful back at home in our shared pursuits.

Slow Food is seen by many to be an elitist, affluent group of foodies looking more like a scene out of Sunset Magazine than an engaged group of activists seeking fundamental change in the food system. I knew my own chapter was a progressive group of go-getters who saw the potential of a national organization to give a voice to food justice in our small, mountain community. But what I found is that the feeling is mutual and universal among all chapters. I discovered genuine, motivated people inspired by Slow Food’s mission to restore the connection we share with our food. The conference reinforced that Slow Food is an organization focused on serious issues aimed at fixing our broken food economy from pushing legislation in the 2012 Farm Bill and protecting SNAP benefits for food insecure populations to petitioning to get GMO foods labeled, educating children about good nutrition and unveiling the true cost of food.

All assembled, there were 150 delegates united and dedicated to making ecologically grown food a right not a privilege. It makes sense that Slow Food is comprised of grassroots activists. Otherwise, we would be just as disconnected from our food system as the ones we hope to transform. Sauteing Swiss chard, having a developed palette and postering over the latest issue of Food & Wine does not make a person better than someone who does not share or know these interests. Having the knowledge is one thing. Doing something with it is another and that is what Slow Food is all about; channeling that passion to make a difference. 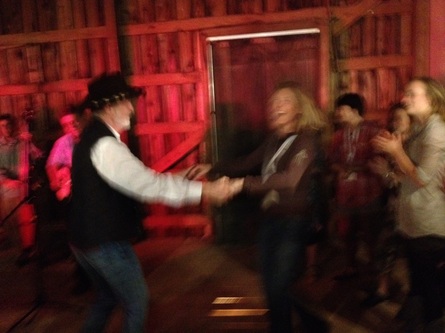 a blurr of swing dancing to Kentucky bluegrass the night of our barn dinner
During closing remarks on the last day, the floor was open to comments. A gal named Eve from Chicago raised her arm and was handed the mic. She stood up and shared a story about meeting the hotel’s parking lot attendant earlier that day. The employee asked what conference they were attending. The gave a concise description of Slow Food not expecting it to resonate. Quite the contrary. His eyes lite up and demonstrated that he understood the basic issues, “That’s good work! You’re helping to make food healthier with less chemical pesticides and fertilizers, right?”

It proved that people get it! They know! They know that much of the food out there is bad for us and the environment. It affirmed the good work they are doing and that all the volunteer hours are worth it because they are fighting for people like that employee of the hotel. Eve finished with this simple and profound statement. I think it is my favorite from the weekend, “Change is hard, but the need is universal!”

Executive Director, Josh Viertel, closed the conference reminding us to celebrate! Celebrate food with music and friends. Without, our work is meaningless! We need both both the pleasure and the responsibility to have balance and be effective.

It reminded me of one of the first potlucks I attended after college. During college I took food for granted and after graduation, I didn’t want to spend the money. That all changed the night I was invited to a dinner party by my friend Mel. It was at the house of Byron and Shalley. People I did not know, yet! I was greeted by the wafting smells of salmon being smoked on the back deck as I arrived. The meal was an explosion of flavors I had never tasted. I remember we started calling Byron’s food Byranian because it was so unique; a fusion of Asian, Thai and Hawaiian. We still reference that moniker to this day. As the dishes piled up in the sink, an array of instruments started emerging from cases and behind chairs. A 3-hour jam session ensued. I had never experienced anything like it before, twenty or more people making music on the fly just feeding off the energy and direction of their fellow players. I have no musical talent but i played a pretty good set of wood sticks. I struck the wood sticks to the beat smiling from ear to ear. I was so happy to be apart of this gathering, this celebration and new friends! I didn’t know it at the time but it was when I first learned about Slow Food!