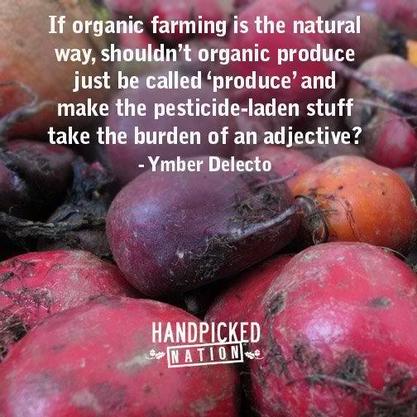 Every week, I pretty much, have something that inspires a blog post. It may be a rant, an epiphany, a story, a farmer profile, an update about one of my food projects, etc. This week, not so much. So I visited my favorite web haunts to drum up some ideas. Nothing! I did some online searches about  food. Still nothing! Soon I found myself at Facebook lurking through my news feed and my friend Sarah had posted this quote! Enough said! I absolutely love it! it sums up the ag debate in a nutshell!

What would the “pesticide-laden” produce be called? I may need some help with this one but here are a few stabs…conventional produce, factory produce, synthetic produce, genetically modified produce, chemical produce, not-your-grandmas’ produce, gag-me-with-a-spoon produce, don’t-buy-me produce, the other produce, enslaved produce, unhappy produce, engineered produce…the list can go on.

I tried to find out more about the person. Ymber Delecto, who coined this saying. But yet again…I came up with nothing. I’m thinking it must be an alias for someone or a fictitious name. So strange! It dilutes the power of the quote not having a personality to attach it too! Or does the mystery of this elusive character make it that much stronger? Hhmm?? I may not have learned more about the author of this quote but I did learn about Handpicked Nation which looks like a rad food site where I might be looking for blog inspiration in the future when I hit a dry-spell or writers block. Check them out!