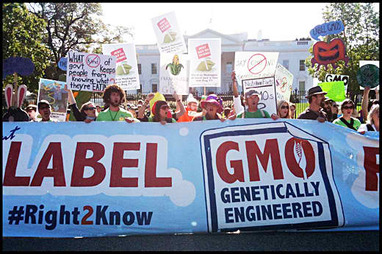 I just received my California Voter Information Guide. It is a tremendous resource outlining candidate platforms and arguments for and against different ballot propositions. I lean on it heavily when wanting to make an informed decision at the polls. But should I? I’ve been following Proposition 37 for months. It advocates to have genetically modified foods labeled. I know what’s at stake with a yes/no vote. In reading the voter guide, however, a less informed voter could easily be swayed or confused. It makes me wonder…”Which way does my vote swing on issues for which I’m less educated and rely on this document. Hhm?

With National Food Day On Wednesday, October 24th…it seemed like a good time to step on the soapbox and clarify what I see as the shades of gray in the voter’s guide and its review of Proposition 37.

YES on Proposition 37 gives consumers the “Right To Know” what’s in their food. It’s not a fluffy statute. It’s been proposed for a reason…because BIG Ag doesn’t want us to know what is in our food. 90% of all corn & soybeans are genetically engineered crops (GE) and close to 70% of all foods in the grocery store contain GE ingredients. By keeping consumers in the dark, it promotes a climate of “don’t ask don’t tell.” If we don’t know, or the facts are withheld, its like its not true and we can continue to live in our disconnected food bubble and consume what we want thinking it is fine. It’s not enough to tell people that GMO’s  (genetically modified organisms) basically dominate the grocery stores shelves thinking that they will avoid these foods if they know how ubiquitous they are. A label gives the consumer knowledge, As we know, “knowledge is power.” Consumers who starting asking questions pose a threat to our food industrial complex which will prompt real change to our broken food system and how food is produced and distributed.

Labeling GMO’s takes the nutrition label one step further. It informs the eater in this bio-technical age which foods have been genetically engineered to withstand ginormous loads of synthetic pesticides. When food is scientifically modified in a petri dish, it changes its chemical make-up which is foreign to our gastrointestinal system and the way our body knows to digest food.

Opponents of Prop 37 claim that more than 400 scientific studies have shown that GE ingredients are safe for consumption. What they don’t tell you is…those studies were performed by the manufacturers themselves, i.e. Monsanto, Cargill, etc. Federal law does not require the regulation of GE Foods and 3rd party research. As a result, 3rd party researchers are not given access to the GE Foods because the manufacturers are not obligated to by the USDA. Despite these barriers, organizations like American Academy of Environmental Medicine have been able to perform some tests on GMO’s which demonstrate reproductive problems, intestinal issues, links to autism, as well as disruption in our immune system.

In closing, something I found really interesting in reading the voter’s guide is who are the contributors to the argument for and rebuttal against. Those “for” are focused on health, food safety and small farms. Those “against” are biotech, science and organizations well funded by Big Ag.
Oh, one last fun fact…40 other nations around the world enforce a GMO label. Food for thought!