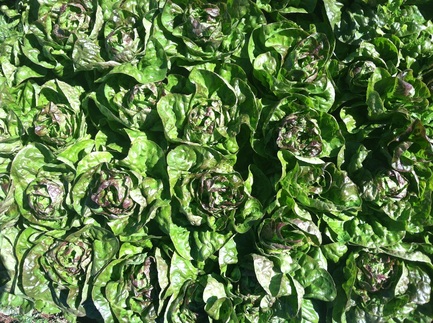 Spring Bounty
Nothing gets me more fired up then a farm tour. Yesterday I traveled to North San Juan outside of Nevada City, CA to pick-up veggies from Mountain Bounty Farm for our annual Slow Food Lake Tahoe fundraiser.

For a budding farmer, I soaked up everything John was saying as we toured the rolling fields inquiring about planting tips, trellising ideas and crop suggestions. I was enamored by the abundance. Acres and acres of food popping out of the ground. It was glorious! No better time to be on a farm than late Spring…everything is so green and a cool breeze still lingers in the air before the dog days of summer settle in. As we passed by a row of lettuces, John volunteered the role a food hub could play in his business. I was delighted to hear his interest…John is a successful direct-to-consumer farmer not needing to depend on other retail markets to make a living. As much as I want a farmer like John to participate in the food hub, a part of me thought he may not have the need. On the contrary! 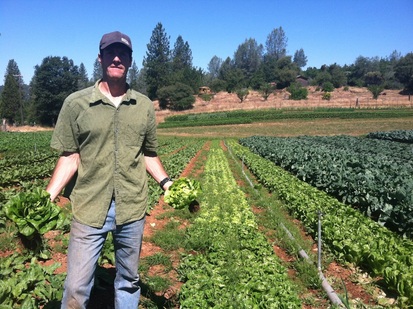 John Tecklin – Mountain Bounty Farm, North San Juan Ridge, CA
He may not need a food hub to make a living but it is not to say he doesn’t have food to contribute or that he doesn’t see an opportunity to make a little more money…He points to the row of lettuce and says, ” See this crop here, we will harvest it tomorrow but we only need 2/3 of it. The rest will get turned under as green manure. My first priority is my obligation to deliver quality, on-time produce to my customers not to manage the wasted food. But it kills me to see it go uneaten,”

John plants six successions of crops in a summer. That way he has a new crop to harvest every two weeks. He has to plant enough in each succession to factor in crop failure, low yields and last minute orders. But when the crop comes in full and healthy, what do you do with the surplus?

He doesn’t have orders lined up for surplus. Nor is it cost effective to call around trying to sell a few heads here and a few heads there to area restaurants. But one call to a food hub and that’s 1000 more heads of lettuce in the regional food system and $750 more in the bank account of a small farmer. It affirmed even more the necessity of a food hub…to rescue the food that goes unharvested.

When we talk about feeding the world, we don’t need to look much further than the amount of food wasted in this country. The average hovers around 40%. As we just saw, the waste starts on the farm. Once at market and after it pasts its sell-by-date, it gets thrown away. What makes it home, often times doesn’t get eaten and spoils. If we just learned to manage our food better, we could feed a lot more people. And organic farmers like John Tecklin are proving you can grow strong yields sustainably. Combined with a food hub to help move food through a community more equitably and we’ve solved a lot more than one farmer’s dilemma! 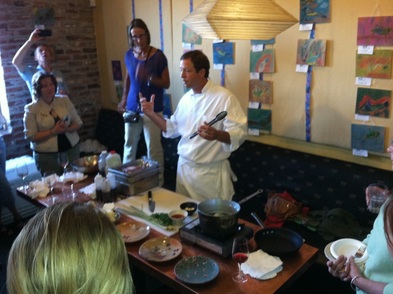 Side Story #1: On the drive home, NPR’s Neil Cohen was interviewing first lady, Michelle Obama on Talk of the Nation. It couldn’t have been more timely. Until listening to her, I was starting to think her backyard garden, school lunch and Let’s Move campaigns were little more than green washing. But hearing her speak, helped me see how genuine she is in her quest. She talked about the initial transition that she made with her family from processed foods to whole, natural and real foods. It wasn’t easy but they did it together. They worked in the garden together, went to farmer’s markets together and experimented in the kitchen together. By including her kids in the process and not just making them eat their broccoli, they transformed.

Kids are adaptable! They aren’t callused with years of poor diets like adults whose eating habits are hard to breakdown. They can change and they can help lead the change. With the parents involved, the kids will change and they will be hardwired to lead healthier lifestyles. “It starts with the kids,” Michelle commented.

My favorite part of the interview was an anecdote she shared from a garden class she had at the White House, “I asked the kids, would you water your plants with soda? And they all crinkled their noses, shook their heads and said no! I reminded them, we are living organisms too just like those plants. What you feed the plants, like our own bodies, affects how it grows.” Hearing her retell the story, gave me goose pimples just thinking about all the light bulbs that were going off in the brains of those little kids standing in that garden on the front lawn.

Side Story #2: To bring the conversation full circle, and then I will close…tonight at the Slow Food event mentioned earlier, “Cooking Outside the Box, “Chef Billy McCullough of Dragonfly Restaurant in Truckee, CA, took the veggies of Mountain Bounty Farm’s CSA box and created the most delicious and simple recipes.”Many of my recipes include just five, whole ingredients. I like to keep it basic and let the flavors shine,” he said.

Six tastings were paired with local wines for people to savor. He blew everyone away with samples of scalloped turnips and curried carrot salad but the showstopper of the night was the thin slivers of golden beets stuffed like raviolis with herbed, goat, cheese drizzled with balsamic vinegar and dressed with fresh arugula! Oh my goodness!

As he addressed the crowd during his cooking demo, he advocated for the importance of good, clean and fair food. “We are co-producers of our food! The choices we make drives what is produced. Safeway didn’t start carrying organic because they wanted to save the world. They did it because they saw a business opportunity. There was a demand for better, healthier, more ecologically grown. By embracing our role in the produce what we eat, we can change the way food is grown.