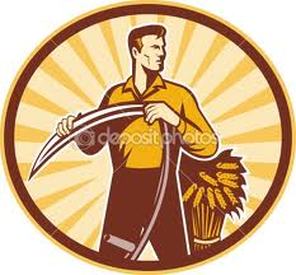 In the wake of Italian Prime Minister, Silvio Berlusconi, resigning and a new Italian government on the horizon, it makes you wonder, “is it really that easy?” Out with the old government and in with the new? All of a sudden, some of my more radical ideas started to seem not so extreme. So I dug through my archives and pulled out a piece that I wrote a couple years ago when I first started dabbling in food thought. I had this idea for a farmer led food revolution. It is pretty idealistic. But sometimes you just have to ask, “What If?”

THE UPRISING
Change in the food system can come from consumers voting with their fork or government passing progressive policy. Neither is moving very fast. What if the change came from farmers? After all, they grow the food! Without them, we would have no food. From that perspective, they hold a lot of power. The number of organic farmers is growing but we need more. Could we get enough conventional farms to transition to sustainable methods before consumer demand and government support turn the tide?

How many conventional farmers would it take to create a farm revolution in Big Ag? If that number banned together in solidarity for better farm practices, it could create a tipping point leading to a cascade of agricultural reforms. But how do we convince this critical mass?

Big Ag has lobbied government to consolidate and centralize taking the farmer out of the equation. It has driven the percentage of registered career farmers down from 20% seventy years ago to just 1%. 1% leaves the agricultural industry vulnerable. A significant disruption like a flood, drought or plight could paralyze the food economy. An organized guerilla effort could give that 1% a lot of power.

THE MOVEMENT
I like to believe that all farmers have an innate love for the land. And if given the chance, conventional farmers would unanimously return to a management style that built integrity not only back into the soil but into their craft. In the root cellars of these tradesmen exist basic guiding principles of land stewardship. Farmers are in many ways the first conservationists; learning from nature on how to grow food and provide. If food insurgents help them recover this lost art, we can reclaim the land and reestablish a sensible, food system.

How about a movement that paid farmers to quit farming conventionally? Farmers would participate in a program where they would be paid from private funds to transition their farms over to organic. Contracts with Monsanto, Cargill and the like would need to be cancelled. Land would begin to heal and diverse farming ecosystems would once again populate the country. A training program would assist farmers in the conversion process giving them the necessary skills as well as a business plan for marketing their products.

If enough farmers participated in the program, the supply of organic food would eventually surpass the supply of conventionally grown food or at least give organic a competitive edge.

THE EFFORT
To convince conventional farmers, a coalition of organic growers would launch a ground effort to talk farmer to farmer. With enough farmers on board, conventional farming would begin to wane and perhaps be extinguished altogether.

The money to fund this project would come from individual donors – celebrities, business men/women, private parties, foundations, etc. Basically, anyone interested in seeing a change. It would require huge capitol. Billions of dollars would be needed to cover all costs associated with the project from paying farmers and training programs to the project’s steering team made up of fundraisers, farmers and administrators.

The proposed revolution would focus on large-scale producers. To truly fix our food economy, we need address the large tracts of land designated for industrial farming and ranching namely the Central Valley and the Bread Basket. The question then becomes…Do we help these farmers improve their practice at their current size or do we encourage them to down-size dividing their land into smaller plots to be bought and sold to new farmers? Smaller farms create jobs and smaller farms can more readily mimic natural ecosystems. Better for the land, better for the economy, better for the community.

Farming is an untapped job market which could significantly reduce unemployment. If we could get just 5% of the population farming again, it would make a huge impact economically, culturally and environmentally. It would help achieve Food Sovereignty where by “the people” define their food system and agricultural policy. Now is the time! The average age of farmers is getting older. We need young, enthusiastic farmers entering the market. If we don’t get more people farming now, the ag giants will only get bigger as the gobble up the land of these aging farmers. Rise your scythe!