Abbondonza is predominantly a veggie and seed producing farm but they do have a fair number of farm animals. The majority of that is taken up by the 230 chickens which compromise over 30 varieties. These are the happiest of chickens roaming free all over the farm in the pastures and around the barns. We are constantly shoeing them out of the nursery or greenhouse but take delight as they “express their chickeness” (term coined by Joel Salatin of Polyface Farms). CSA members can get an egg share or folks can buy them  at the farmers market where upwards of 80 dozen eggs are for sale each week – one dozen for $7 or two for $10. Today, while watering starter plants in the nursery, I discovered it truly was a nursery because roosting behind some potted saplings, was a mother hen and her eight chics. Not all were even born yet as you could see the beak of a chic pecking through its shell, see picture below.We took just a moment to admire and let the mother get back to her babies. Then as we uncovered some compost, a mouse scurried away exposing a small nest with four baby mice curled up in a bed of chicken feathers. We put the nest in the shade near to where the compost mound had been and hoped the mother would return. We left it unattended and within an hour the the mother had come back to relocate her family.

In the barn, we have two goats named Mack and Ringo, two work horses named Kane and Pete and one donkey named Ellie. The goats help with mowing the grass and disposing of food scraps. But watch out for their horns. They have and aren’t afraid to use them! Pete and Kane are in training to be work horses. Pete is five and Kane is three, see below. Pete is Kane’s uncle. A couple times a week, husband and wife team – Ken and Becky, arrive for Pete & Kane’s training exercises where they practice walking side-by-side around the farm perimeter with a plow on wheels. We’re hoping to have Pete in the fields by fall. And then there is sweet Ellie who just loves a treat and a scratch on the nose. 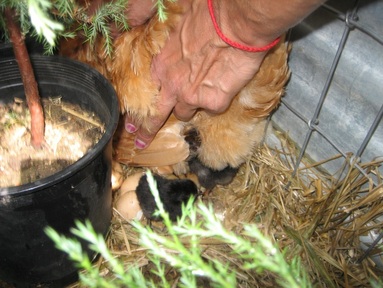