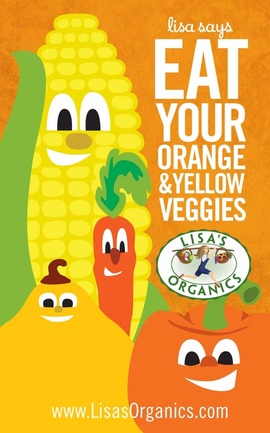 One of Five “Eat Your Color” fridge magnets
Our first Gardens to Hospitals event is about to kick-off next week in Jackson, CA. Gardens to Hospitals (G2H) is a project of Lisa’s Organics – an organic, frozen vegetable producer based in Lake Tahoe, CA. In short, G2H partners school gardens with hospitals to raise awareness for healthy meal programs and install edible gardens at the hospital. In Jackson, students from local Argonaut High School will lead a food lesson at Sutter Amador Hospital for area children ages 4-7 years old. The lesson plays off a campaign that ran in 2011 for National Nutrition Month called “Eat Your Colors!” Unfortunately, the brilliant campaign only ran for that one month and was archived. Ironically, the campaign is very similar to Lisa’s Organics brand slogan, “Eat Your Veggies.”

I immediately saw the parallel and began to brainstorm! The result…adorable, fridge magnets as shown in the example to the left. There are five in all. One for each of the following colors: red, green, purple, white/brown and yellow/orange. Each child that attends the G2H event will receive a packet of five magnets. After the lesson, the kids will get a chance to plant some seeds and starters in raised beds which will reside on the hospital’s cafeteria patio. The high school students will remind the children about the different colors of each veggie being planted as well as the color of the veggies they will be sampling that day from local, organic farms. The kids will learn their food colors, plant the seed and taste its flavor. At home, they will play with their magnets and hopefully grab one off the fridge and say something like, “Mom, I want purple veggies for dinner!”

Speaking of “colors.” The growing dome has been exploding with color the last couple weeks. We are into our 6th week of harvests donating 10-12lbs of assorted greens to our local hunger relief agency, Project Mana. But last week, we started adding radishes and this week beets and carrots. One of my favorite food films, Fridays at the Farm, described the sensation of harvesting radishes to “pulling teeth from the mouth of God!” I love that visual. Today, I got the same satisfaction from harvesting the carrots. With radishes and beets, you can pretty much tell how big the root is before you pull it out of the ground. Carrots on the other hand are a big surprise. They don’t reveal their size till plucked. You grab the base of the stem and start pulling. I don’t know why but I was half expecting 1-2″ puny, roots but on average, they were more like 6-7″ long. I sounded like I was watching fireworks instead of harvesting vegetables as exclamations erupted from my mouth, “Ooooh, Wow!”  With each pull I was more and more elated as these striking orange sticks continued to come out of the ground. I felt a little like a magician pulling a scarf out of their sleeve…i just kept pulling and pulling. I love farming!

Check out the video below for a virtual tour of the dome and exciting times on harvest day!