BACK ON THE FARM – FOODLUST PART III 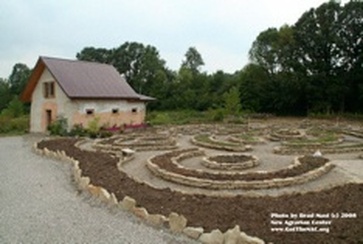 Phase three of my food journey began today…a 6-week internship on George Jones Memorial Farm in Northeast Ohio. I’ve landed in some pretty amazing places along the way starting in Boulder this past June on the Abbondonza Seed & Produce Farm then the agroecology course in July at UC Santa Cruz and now here. George Jones looks to be following in those same footsteps. As I’ve pieced together this learning experience, I’ve called it anything from my self-prescribed curriculum to my independent study or unaccredited PhD program. Call it what you will but I’m soaking in lots of information and refining my focus beyond just “sustainable” but to say “regional” food systems because localizing economies is the ticket to a sustainable food system.

Okay, more about George…In 2001, Oberlin College’s New Agrarian Center (NAC) acquired the 70-acre farmstead which had been used intensively for commodity crops throughout the later part of the 20th century. By 2003, five acres had been restored and was ready for organic production offering food not only for Oberlin College’s dining services but also a CSA program, local farmer’s market, area restaurants and an organic food distributor.

The farm is run pretty much entirely by students with the help of master gardener and farm manager, Evelyn Bryant. In the summer, four, student interns participate in a 10-week course learning everything about organic food production. “Our goal is to send the interns off with the confidence to farm a small plot of land,” Evelyn explains. “We want them to understand the basics of irrigation strategy, pest management and marketing which includes not only working with vendors but learning how to plant crops in succession so you can harvest food throughout the entire growing season.”

During the school year, students circulate through either as volunteers or to acquire food for one of the school’s many student-run dining co-ops. The co-ops are brilliant…instead of a campus meal plan, students can elect to participate in a co-op where they build menus, shop and prepare three meals a day. There are nine co-ops each with anywhere from 15-120 students in each. All strive to source as much local, organic food as possible and students can choose a co-op based on dietary concerns or cultural preferences, e.g. kosher, vegetarian, international, etc. UC Berkeley has the largest dining co-op of any university but Oberlin has the highest percentage of student participation in the United States with over 600 active students. Not only do students learn valuable life skills but learn the importance of community.

The New Agrarian Center has been the ring leader of the local, food movement extending well past Oberlin into neighboring counties all across Northeast Ohio. They were instrumental in the construction of the Northeast Ohio Regional Food Congress. Based out of Cleveland State University, the 15-member collaborative led to the creation of City Fresh, an initiative to bring fresh local food into Cleveland food deserts (discussed earlier). In 2007, NAC co-founded the Cleveland-Cuyahoga County Food Policy Coalition which continues this effort to cultivate a network of food projects and entrepreneurs with a common goal of increasing access to healthy, sustainably grown food.