A Field Day with Gene Logsdon 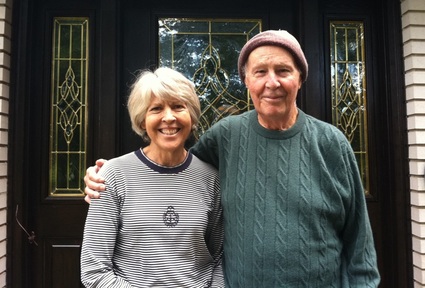 Carol and Gene Logsdon
In 1974, a book of poems came across Gene Logsdon’s desk  while working for the Farm Journal in Philadelphia. He read four poems and closed the book. He got up from his desk and marched straight into his editor’s office and said, “I’m going on a trip.” “Where?” replied his editor.“ “To interview Wendell Berry!” The two have been good friends ever since. They are kindred, agrarian spirits. In Gene’s living room is a shelf of Wendell’s books. Below is a shelf of Gene’s books. “We have a friendly competition going.” says Gene with a smile.

I can relate to Gene’s affinity for Wendell’s writing. After reading an essay by Gene Logsdon in the book, “The New Agrarianism,” I knew I wanted to meet Gene. In no way, can I compare to his and Wendell’s literary excellence nor years of dedication to a pastoral life but his writing struck a chord with my food system aspirations and I knew I had to meet him. And that wish came true this past weekend.

Gene is one of farming’s most prolific writers with over 25 books, countless essays and now a thriving blog, The Contrary Farmer. In 1975, he moved with his family from Philadelphia back to his home of Upper Sandusky, Ohio and purchased a small 22-acre farm. As a longtime lover of art, his farm became his canvas. And like an artist, he would use his landscape to experiment with growing techniques and farming designs that mimicked nature’s biological processes. He wrote about his practical experience sharing his wisdom and pastoral philosophy with others. His writing had a symbiotic relationship with the farm just like the interdependent relationships observed in nature between plants and soil, livestock and grass, etc. One feeds the other. 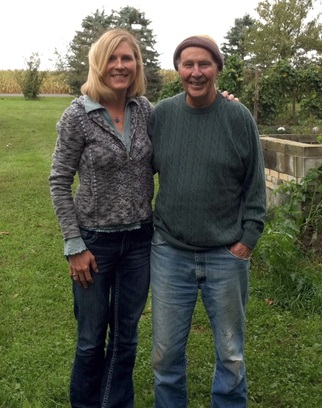 Me and Gene
We fireside chatted for over 3 hours. The rain drizzled outside and there were concerns of a first frost and the impact it may have on a small test plot of maturing, field corn. We talked about his long-ago plans to have a raspberry business. His love for paintings by Andrew Wyeth. His neighbors…most of whom are conventional growers with scheduled chemical applications and monocultures but who are also his friends. They have a mutual respect for the each other. Each has been at it a long time and are good at what they do. We talked about crop rotations, tillage, pest management and his passion for pasture farming. He bred lamb for years. In 2008, he mated his ewes for the last time. The fifteen, lucky gals who remain will live out their lives and assist Gene in his life’s work, studying the benefits of his rotational grazing techniques.

We spoke at length about “How to get BIG ag interested in being more sustainable?” For a long time, I’ve wanted to believe that conventional farmers were just hog-tied to a system – caught in a viscous cycle with government subsidies and Monsanto contracts. Otherwise, I felt they were stewards of the land and saw the destruction their farming practices had and would change if given the financial incentive. Quite the contrary Gene says, “most think they are helping to feed the world.” My idealism was set back by this fundamental difference. But as the afternoon progressed, I started to understand Gene’s approach to this question. It’s not so much about transitioning to organic certified as it is about transitioning away from industrial agriculture. But how do we get there? Storming the castle with pitchforks and torches is not an effective form of persuasion. Nor is pushing a hard line of organics on conventional growers. But if we can get larger farms to downsize into small and mid-sized farms, we could break the current commercial model. Smaller farms can adopt sustainable farming practices easier than larger ones because they can accommodate biodiversity better thus requiring fewer outside inputs to control pests and weeds. Food will not have to travel as far because the farms will be supporting a local economy as part of a more, regional, food system.

Gene offers a great suggestion in a recent blog post on September 14th entitled, “Small Farms Creates More Jobs.” Here’s the skinny…many of the big-daddy corn producers have anywhere between 4,000-6,000 acres. It takes only one farmer and one to two ranch-hands to farm these mega-farms because of the ginormous equipment available today. What if just a fraction of the 90 million acres of corn fields nationwide (and remember we are just talking corn, doesn’t include other commodity and specialty crops) were broken down into smaller 150-300 acre family farms? Each could employ 2-4 people and their families. Many farmers are getting older. They may not have next of kin to take over the farm or their children may not want to continue farming. The opportunity awaits these families. But we have to reach them before Monsanto or a developer does and prove the economic benefits for them, the immediate future of their community and future of their grandchildren. 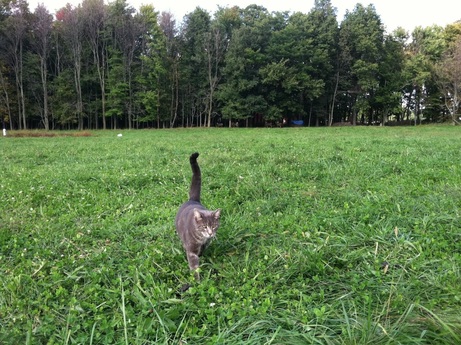 Flash, the farm cat
We looked at the time, it was after 4:30pm. I was honored Gene had taken so much time to speak with me. Before I left, there was one last thing on my list…a farm tour. The 2-acre vegetable garden and orchard provided an edible, front yard landscape. Behind the house, a short path lead through the forest to the barns and pasture. How lovely to have this contemplative stroll each day under the canopy of a mature woodland. As we emerged on the other side, I could see the sheep sunning themselves in the field. The clouds had broken providing a temporary thaw to the otherwise, chilly, fall air. Underfoot, you could feel the structural health of the grass hummocky from years of succession. We picked at different threads of green poking out of the field discussing the variety of the mix available to the sheep. One of the farm cats, Flash, joined us for the whole tour rubbing up against my pant leg whenever we stopped. We looked out over the eight pastures he uses to rotate the sheep. Well, seven because one will be returned to a forest – forests are the subject of his new book, “Sanctuary of Trees,” due out in early 2012. 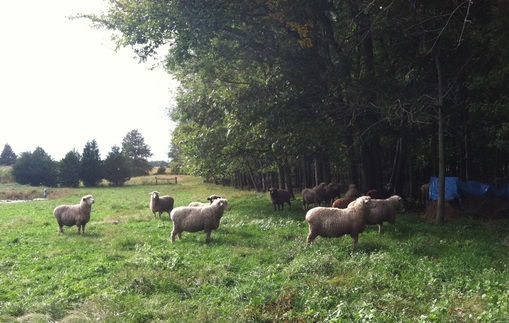 We found our way over to the small test plot of open-pollinated corn, aka field corn. He had been telling me about the 16” ears he was finding in the crop. We sifted through the stalks first finding a 12”, then a 14” and finally a 16” long ear of corn. Gene thinks it may be the longest ear of field corn he has ever heard of. For the past 35 years, he’s been selecting seeds from the biggest ears each harvest saving them and planting them the next year. That is dedication and thoughtfulness. It gave me pause to realize more than ever, I was in the presence of a great man, a great farmer. He will mill the crop for cornmeal and for supplementing the otherwise, natural diet of the sheep and chickens.

We sank bank into the woods connecting the pastures to the house. At the entrance to the backyard, two, deep rubber bins were buried in the ground up to their lids. “Outdoor root cellars right?” “Yes, exactly! We keep potatoes in them,” replied Gene. “I love simple ideas like that,” I commented. “Not enough money in simple ideas,” said Gene. It was subtle but profound. Conventional agriculture is far from simple. But it’s where it is today because industrialization is considered profitable and the way to make money. Ironically, it’s those simple ideas that are going to bring equity back into our food system.

Parting Note: When I was preparing for my meeting with Gene, I came across a 2009 podcast on www.beginningfarmers.org. It’s a great interview and I highly recommend it. Plus, it describes our parallel to the Mayan culture and how agricultural mistakes can be attributed to many of the collapses throughout cultural history. The Mayan’s relied too heavily on corn. Sound familiar?